Ferencvaros, as it is known by the locals, is the area located in the south-eastern corner of Budapest downtown. District IX is known as one of the most eclectic neighborhoods in Budapest, because it contains elements of both its bordering neighbourhoods (District VIII on the right and V in the north).

It is this ambiguity what provides a totally unique atmosphere in the streets, squares and public spaces.

This district have seen massive redevelopment and modern construction, what make it now one of the liveliest and trendiest pockets in the city, specially within young people, many of whom also buy their first flat within its confines. 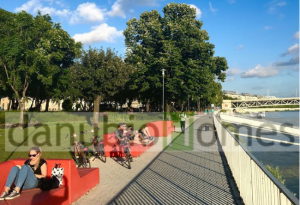 Along the big arteries of Ulloi Út and Raday Utca, the area is filled with shops, restaurants (fine dining and local), markets and is easily accessible to all kind of public transport connecting the city, like Tram 4-6, Metro line 3 and many bus lines.

Another reclaim for this district is the proximity to many of the most important universities in Budapest, located within this downtown area. Students around the World come to make their studies in Budapest. This city have a vibrant ambience for them, and it is in District IX where lots of them decide to live during their stay.

The Great Market Hall (Nagycsarnok) built in 1897 is the most beautiful of all Budapest market halls. And the market is not only ‘Great’ in its size, but is also great in other aspects. Most importantly the market is also central, no wonder it is also called the Central Market Hall, for both of its location (5 min walk from the city center), and the volume of trade taking place here on a daily basis.

Here you may find fresh products every day, ranging from fruits and vegetables to all kind of traditional Hungarian meats (hint: they are delicious).

Apart from being one of Budapest most visited places by tourists. Due to the brilliant architecture and ambience, many locals provide themselves of groceries here everyday.

Also, on the second floor of the market you may find a long (really long) corridor with all kind of typical Hungarian food stands. Some of these meals are hard to find in restaurants around the city.

It is a great opportunity if you want to try the most notorious Hungarian dishes. Quick, easy and delicious!

As said, District IX is famous also for having within it reaches many of the most important universities in Budapest. However the most famous ones are Semmelweis and Corvinus.

Semmelweis is the oldest medical school in Hungary and, thus, one of the most reputed universities in the country. Many students whether locals as international come here to develop their medicine studies, as there are many faculties in the university that offers courses in Hungarian, English and German.

Secondly, Corvinus University is a very well-known university in the country; it was listed in the top 50 in the Financial Times European Masters in Management rankings, and was the first Hungarian university mentioned among the best in the area of agriculture.

District IX hosts the most important cultural centers of downtown Budapest. Not far from the market on a quiet side street is the Budapest Music Center. The state-of-the-art jazz club on the ground floor of this beautifully refurbished 19th century building is the center of Budapest’s jazz scene. Almost daily live concerts in this place.

The CET, a whale-shaped building made of steel-and-glass is one of the most ambitious architectural projects in downtown Budapest. It functions as a giant cultural and commercial space.

Some streets ahead, we find the architectural highlight of District 9. The supreme yet unobtrusive building of Müpa Budapest.